Warning: Use of undefined constant tru - assumed 'tru' (this will throw an Error in a future version of PHP) in /home/customer/www/paulanthonysleeman.com/public_html/wp-content/themes/browndiamond/functions.php on line 36 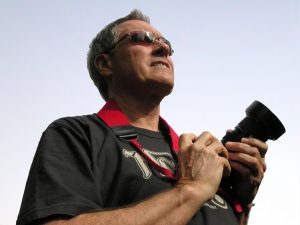 Paul is a member of the American Society of Media Photographers (ASMP) and divides his time between New York and Sydney. His photographic endeavors commenced back in 1953 when gifted an old Agfa Ansco bellows camera.  Self-taught, Paul is a product of a creative family of artists and photographers and commenced his professional career as a photojournalist in the 60’s with rock magazines, capturing groups including the Rolling Stones. By the 80’s, he was based in South East Asia, primarily Hong Kong and Jakarta, focusing on the socio-political climate of China and Indonesia, before returning to Sydney to work as a scriptwriter.

Paul’s work has addressed various genres from travel, portraiture and architecture to nudes, the latter forming the basis for his ongoing interest in the sculptural effect of light and shadow.  His architectural images are in the possession of private and corporate collections including The American Club, which has nine images from his Gotham series and Mercedes-Benz with a selection of thirty-two images from his Emerald City collection on permanent display.  His travel images are held in major image banks. Paul’s first-ever retrospective book, Paul Anthony Sleeman: Decade 2001-2010, featuring images in the fields of architecture, life, Islam, and the female nude, was published in New York in May 2010 (sold out).  His book is held in National, various State and University libraries.